I am trying to use the region command to carve a cylindrical void out of a rectangular block located in the middle of my simulation box, as shown in the attached image. The dimensions of the block along the y and z directions are identical to that of the simulation box. Along the x direction, the simulation box bounds are -45 and 55 while those of the block are 0 and 10. The cylinder axis is along the x direction and located at y=z=0.0. The length of the cylindrical void is 10.0. I attempted to set up this geometry using the following sequence of commands:

Subsequently, I used the fix wall/region command as follows:

I first computed the force exerted by the wall on a single test atom placed at the locations (-0.01,0,0) and (0.01,0,0). At the former location, the force is zero. However, I obtained a force of magnitude 10^27 acting along the positive x-direction for the latter case. This seems to suggest that the atom experiences a wall force due to the flat surface of the cylinder, which is not what I want. May I know how the above sequence of commands should be modified to get rid of this force so that particles can move freely in and out of the cylindrical void?

DISCLAIMER The sender of this email is an alumnus of National University of Singapore (NUS). Kindly note that NUS is not responsible for the contents of this email, and views and opinions expressed are solely the sender’s. 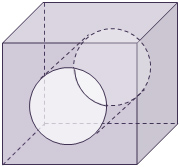 are you certain, that it has to be “side out” for region r4 and not “side in”?