My new project is related to self-assembly of patchy particles. For these patchy particles, I would like to do Molecular dynamics simulation using Kern-Frenkel model. I do know how to implement new FF in LAMMPS.

I am wondering if someone can help me to implement the Kern-Frenkel model in LAMMPS.

Is there anything similar FF implemented in LAMMPS?

My new project is related to self-assembly of patchy particles. For these
patchy particles, I would like to do Molecular dynamics simulation using
Kern-Frenkel model. I do know how to implement new FF in LAMMPS.

I am wondering if someone can help me to implement the Kern-Frenkel model
in LAMMPS.

Is there anything similar FF implemented in LAMMPS?

​i don't know. you have the paper, you can check the LAMMPS documentation.
reading through it and checking is just due diligence. 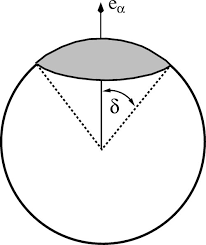 This kind of force-field is more appropriate for a Monte-Carlo simulation, not a molecular dynamics simulation. Molecular dynamics requires you to calculate the force between particles. (Since your particles are not point-like, you also have to worry about torques). But in a square-well potential, the forces (and torques) between particles are either zero or infinity. This means that, if you still plan to use LAMMPS, you would need to integrate over the degrees of freedom of the system using “fix gcmc” (or “fix atom/swap”?) instead of a more traditional method for integrating the equations of motion (such as fix npt, nph, nvt, nve, or langevin).

Alternately, you could modify the model so that it uses softer potentials so that the forces are always finite (and hopefully continuous).
Since your particles have multiple attractive patches, you will need to create arrays that store these internal properties of these atoms. You could either try and create your own new atom_style (difficult), or use “fix property/atom” to do this:
http://lammps.sandia.gov/doc/fix_property_atom.html

http://lammps.sandia.gov/doc/atom_style.html
There are examples of pairwise-interactions which depend on the orientation between two particles:
http://lammps.sandia.gov/doc/pair_gayberne.html
If you decide to use LAMMPS to run your simulation, then will have to read how these interactions are implemented (in pair_gayberne.cpp), and create a new pair_style which implements the square-well potential used in the paper.

I hope this gets you started.

LAMMPS is not really optimised for this kind of simulation. At the very least, you will have to write your own pair_style (perhaps similar to “pair_gayberne.cpp”.

When is LAMMPS useful?

LAMMPS might be more appropriate if you wanted to implement your patchy particles using an atomistic model (perhaps using fix rigid, fix rigid/small, and/or atom_style body.) See pictures below: 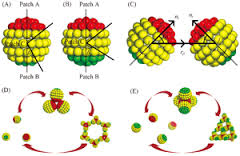 LAMMPS would be especially useful if you plan to add molecular details to these patches, as shown below:

… but all of these models are fundamentally different from the Kern+Frenkel paper (even though they may behave in a physically similar way).

The Kern-Frenkel model a simple elegant model with a small number of parameters. If all you ever plan to do is reproduce the results of the Kern-Frenkel paper exactly, then it is probably more straightforward to simply write your own Monte-Carlo simulation program. (Especially if you only have a small number of particles and don’t need to take advantage of the parallelism that MPI provides. The simulations in the Kern-Frenkel paper only have 512 particles.) But I suspect in the long run, this might not be what you want to do, especially if you plan to add molecular details later.

I hope this helps.

Great answer and details from Andrew. The pictures of patchy particles
are similar to those that Sharon Glotzer’s group did years ago.
You can do those kinds of models in LAMMPS using rigid bodies (fix rigid or rigid/small)
and make the atoms of different colors be different types. The typical
models use simple pairwise potentials for inter-body interactions between
pairs of small/small particles. Different LJ sigma/epsilon/cutoff for different
atom types, which is straightforward in LAMMPS. I.e. what a “patch” means
is that one patch attracts another, but there is no attraction between
non-patchy particles.