It looks like there is a problem with the 3 “read_data” commands in your input script.
They are probably not moving the 3 grain objects where you want them to go.
It seems like they are overlapping. This is not surprising. It’s easy to make mistakes when using multiple “read_data” commands. Using a single data file is easier to understand and it’s much easier to visualize what is going on.

Also, you never specified the final size of your boundary box.
LAMMPS (and OVITO) will probably guess what the box is (incorrectly).

To define the final boundary box, you can either:

You can merge data files using various tools including topotools, pizza.py and moltemplate.
I am attaching an example of the files you need to merge grain1.data, grain2.data, and grain3.data into a single DATA file (“system.data”) using moltemplate. (I rotated some of them for fun. This is probably not what you want to do. Edit the “system.lt” file to control the position and orientation of each grain. You can also control the shape of the boundary box from within that file.) 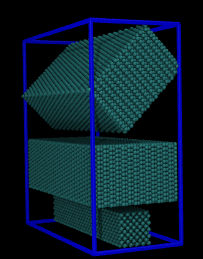