Out of Range Atoms of Water Molecules in a Box

I have been trying to simulate water molecules in a box with dimension of 30x30x30 A. I am using packmol to distribute the location of each water molecule then I have used minimize command to update the coordinate of each atom before I run the simulation.
The problem I met are:

also, I’d like to ask whether there is any other website or book that can be used to undertanding more about lammps.

Here is my input script: 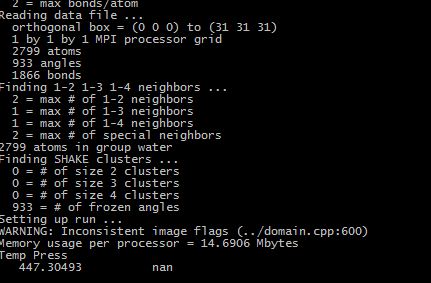 My guess on the out-or-range error is that you have bad dynamics,

i.e. the water is moving too far too fast.

For image flags: from doc/Section_error.html

The image flags for a pair on bonded atoms appear to be inconsistent.
Inconsistent means that when the coordinates of the two atoms are
unwrapped using the image flags, the two atoms are far apart.
Specifically they are further apart than half a periodic box length.
Or they are more than a box length apart in a non-periodic dimension.
This is usually due to the initial data file not having correct image
flags for the 2 atoms in a bond that straddles a periodic boundary.
They should be different by 1 in that case. This is a warning because
inconsistent image flags will not cause problems for dynamics or most
LAMMPS simulations. However they can cause problems when such atoms
are used with the fix rigid or replicate commands.

also, I’d like to ask whether there is any other website or book that can be used to undertanding more >about lammps.

The manual is 1000+ pages, there is a doc/Developer.pdf, and the entire

web site. That’s all there is that I’m aware of.