System blows up during a charged particle deposition run, Al2O3 on Si, trouble might be due to kspace definition?

I am trying to deposit Al2O3 on Si.
Si substrate is prepared at 300K.
Data file is modified before deposition. ( added charge column, number of masses and types etc. )

I adapted the MATSUI coeff. for born/coul/long potential style, also tried Jakse ( adapted from a paper)

The problem is this potential asking for kspace…
this is a deposition so initially there were no charged particles, so kspace gave an error.
To bypass this, I manually inserted 2 positively charged Al and 3 negatively charged O into the data file at the top of the box, where normally deposition would start.

It runs but system blows up due to lost atoms…

below is the SS of the run window… 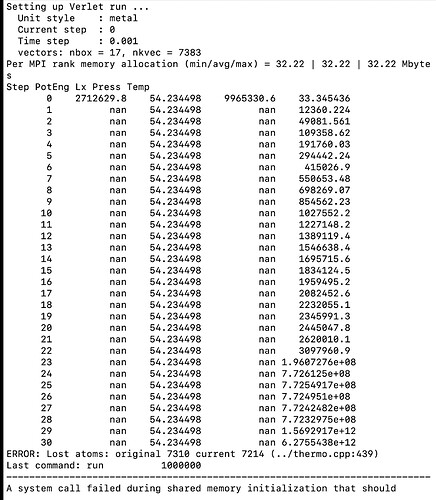 potential energy and press values are NAN right after start

Your problem are not the lost atoms, your problem is already with the very first step.
Your potential energy is gigantic and your temperature goes crazy in just one step.
That means you have a bogus initial geometry or a very bad set of force field parameters.

This is behaving badly even if comment out the two fix deposit lines.

The NaNs that you are seeing are due to the deposit, but not because of kspace, but because you are creating atoms exactly on top of each other. That can only be avoided by using different deposit regions or by depositing not single atoms but groups (e.g. 2x al 3x o) with a molecule file. The exact overlap of the two deposits is guaranteed by using the same random number seed, which is a particularly bad idea.

Many other parameter choices are also questionable (e.g. ewald/disp convergence with only 1.0e-3 that almost guarantees bad forces), but those are negligible in comparison with the bad geometry.