I am attaching a picture of the elements to convert (from line 7 to the end). Is this correct ? 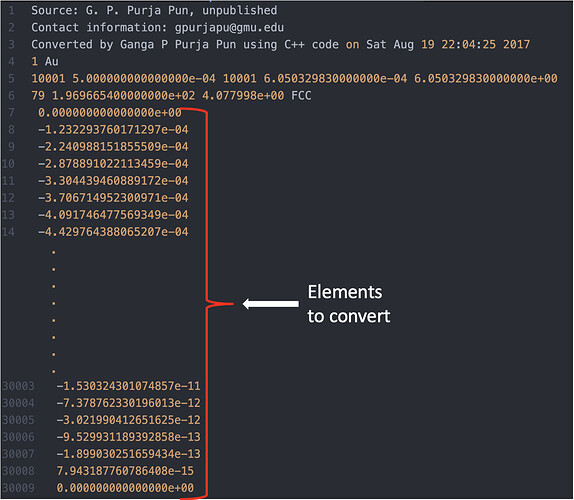 That is not a good idea. ReaxFF is written and parameterized under the assumption that there is no other interaction. Particularly the included charge equilibration will be inconsistent and problematic if not all atoms are included.
Furthermore, you will also need a third potential, that must be a pair-wise additive potential, to describe the interaction between the two hybrid subsystems. Why do you need a reactive potential for your molecules, anyway? You may have better (and faster!) results from using a conventional molecular force field.

The format of the potential files is described in detail in the pair style eam documentation. Since “metal” and “real” units use the same length unit, only terms including the energy unit need to be converted.

Thank you so much for this clarification. It helps a lot.

charge equilibration will be inconsistent and problematic if not all atoms are included.

you will also need a third potential, that must be a pair-wise additive potential

Indeed, I would use a Lennard-Jones potential to model the interaction between the liquid molecule and the plate.

Do these 2 pieces of information resolve the problem ?

Why do you need a reactive potential for your molecules, anyway?

Thanks again for you help,
Rafid.

its temperature increases to about 6000 K, which may cause the covalent bonds to break, and which is not captured by AMBER force field. For this reason, I plan to repeat the same study by replacing AMBER potential with ReaxFF potential, and I expect to see breaking of covalent bonds.

While ReaxFF can indeed model bond breaking, I don’t think that it can be easily adapted to this scenario. You would need a set of potential parameters consistent with the conditions, which in turn almost certainly would need to include the metal surface as well.

Also, I don’t believe that a Lennard-Jones potential would be a good choice for the metal-molecule interaction. Its repulsive branch is rather unrealistic for such situations.

In total, your description sounds a lot like any attempt to model this kind of environment with a classical potential (especially one not parameterized for such conditions) is likely to have a very large error margin. I would seriously consider moving to use an ab initio or at least semi-empirical treatment of the interactions.

OK I see. Thank you for enlightening explanation.

While the metal atoms may not have a net charge, metals are also highly polarizable due to the high mobility of the electrons. This effect and the impact of absorbed atoms on the embedding energy is going to be ignored by a hybrid model, regardless of whether you use AMBER or ReaxFF.
With an EAM-only setup, this polarization does not occur.