I am relatively new to lammps and I am trying to make a lattice based network with bonds reminiscent of fiber networks. The bonds must have both central force energy between the springs as well as energy due to bending. Therefore I chose bpm/rotational bond style. However, when using fix bond/create or fix bond/break, the bonds do not create or break with an equal probability among all the bonds. It’s because it does not create more than one bond per atom. Fix bond/break does not break more than one bond per atom either. From the documentation of fix bond/create, it says every atom bonds to an atom that is considered to be “sole” among the multiple possible partners. I’m supposed to make a triangular network with 6 bonds per atom. However, fix bond/create only creates 1 bond per atom. I tried to work around that by running fix bond/create multiple times. But, that’s not creating bonds with equal probability amongst all bonds but favors only certain bonds per random number. Can anyone help me with that?
I have attached the image where it deletes bonds with some bias. Also the probability used for the image to break bonds was 1.0!! At prob = 1.0, I believe it must break all bonds. I’m not sure if I’m missing something here. 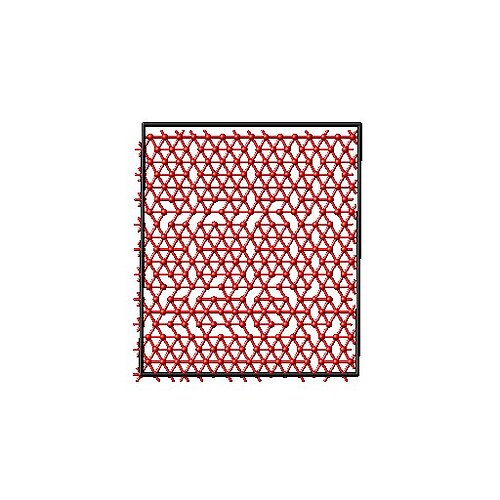 However, when using fix bond/create

Hello,
I am not sure that ‘bond/create’ is the best option for creating your initial topology, at least not for your system (I may be wrong, I don’t know what ‘a network with bonds reminiscent of fiber network’ is). If I were you, I would rather create the system using some external software (Python or other). It would make it easier to choose which atoms you want to connect with bonds…
Simon

Thanks Simon for the reply.
By fiber networks, I meant fiber like biological polymer networks.
I do have a code written in C++, however I’m trying to create the system in LAMMPS with multiple goals in mind. For example, some transitions would be easier like going from a 2D system to a 3D system, multiple topologies can be worked out easily as well and so on…
Do you think there’s any other way?

Do you think there’s any other way?

Fix bond/create is rather simpleminded. I agree with Simon on preferring an external, custom tool.
You know a lot about your specific compounds that can be used to steer the model building that a generic tool does not easily have available.

If you still want to use something more sophisticated in LAMMPS, you may want to have a look at fix bond/react instead.

Thanks Alex, I’ll look into it.