Generating a spherical shell with an entry hole

Your commands and your description don’t match well and it is not quite clear what geometry you are really envisioning, specifically where the particles would do.

A good way to debug complex regions is to fill them with atoms or use them to delete atoms and then visualize the result (or just write an image with dump image).

For example this input creates an image like is shown below: 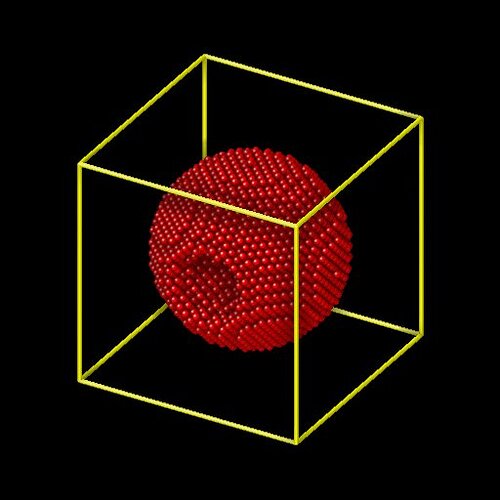 Thanks for your inputs! Thanks for pointing out the create_atoms command which is a very useful debugging tool.

I was actually looking for the exact opposite of this, that is particles should be free to roam outside the shell(outside the larger sphere), inside the shell(inside the smaller sphere) which is accessible through a hole, and not the region between the two spheres

I think at this point, you will become subject to the various limitations of fix wall/region.
It is going to be easier to simply build your wall from immobile particles. When using a pair potential like lj/cut, you can adjust the density or sigma or both to make it a smooth surface (LJ and most other pairwise potentials are quite “soft” potentials to begin with). When using granular potentials, you can adjust the particle size so there is sufficient overlap to minimize surface “roughness”. Here is an example demonstrating it for an ideal gas like LJ model based on my previous suggestion:

There is a point where constructing geometries from regions becomes cumbersome anyway and for that it would be better to implement a generic triangulated surface interaction from a surface mesh. This currently only exists for the MACHDYN package (fix smd/wall_surface command — LAMMPS documentation), but since it does it via parsing an STL triangle file to translate each triangle into a suitable particle, it would not be too difficult to adapt that code to be added to “create_atoms” (or as a special “create_atom_mesh” command).

Here is a short demo from an example of the MACHDYN package using an STL defined particle wall (created with VMD which can load the STL file for visualization). Fluid flow through complex surface from STL file - YouTube

Thanks again, I was able to pick up a lot of new lammps capabilities and limitations from your code!