Hi, fellow LAMMPSer’s. I am studying the example examples/shear/in.shear. I wonder how to shear the specimen as in this example (see figure below), but in a quasi-static way, such that the kinetic energy of the atoms is 0. 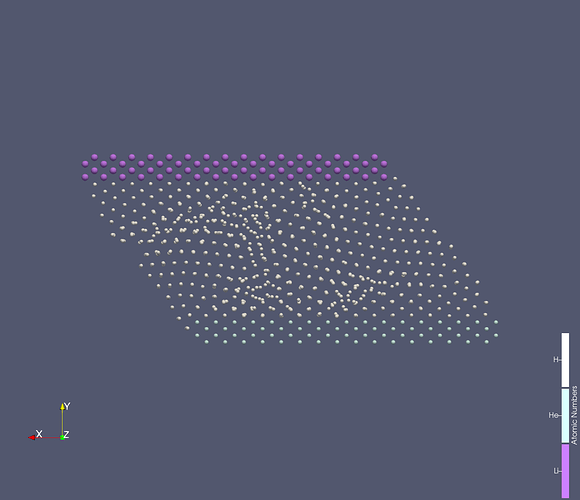 Here were my attemps.

However, in this case, the whole specimen is sheared, so the dislocation happens at multiple places. This case does not match the example, where only the upper layer is being “pushed”.

Thank you in advance.

as in the following code snipet, but it didn’t have any effect.

using a variables the way it is done in this section is a clear example for the pointless abuse of the variable command. a loop as shown can be done much simpler:

This combination of commands makes very little sense. Once you have minimized a system (i.e. brought it to a state that is close to 0K) very little will happen when applying a force unless that force is gigantic and then it will likely just rip the system apart. The single MD step does nothing useful.

See my comment from above about the behavior of 0K systems. What happens will crucially depend on how much you displace the top atoms. There need by strong enough interactions with the rest of the system and a slow enough displacement per step so that the sandwiched system can follow.

However, in this case, the whole specimen is sheared, so the dislocation happens at multiple places.

LAMMPS just does what you ask it to do.

Thanks a lot. That makes it clearer.