I am using LAMMPS for MD simulation of carbon nanotube (CNT). I am new to this field and a beginner of LAMMPS as well. I have been trying to simulate water transport through CNT with the similar setup as in Ref. 1 & 2.

I am facing few problems with generating data script for LAMMPS of the initial system(with CNT, water and graphene sheet). I am using “VMD and Topotools (VMD plugin)” to generate the data script for a box of graphene sheet filled with water molecules whereas the box itself is connected with CNT. I have collected a script of SPC water molecules wrapped in a rectangular box and I can generate data script for CNT and graphene sheet separately using ‘Nanotube Builder plugin’. I can merge them together to create a single data script as well (according to the method described in here: https://sites.google.com/site/akohlmey/software/topotools/topotools-tutorial---part-2). However, the main concern is that I could not be able to make the geometrical system as described in those references especially how to connect the CNT and graphene sheet with a cylindrical hole in it (graphene sheet) as the same diameter of CNT or filling the CNT with water molecules (for another case). Is it possible to do using VMD and Topotools or TCL script (although still working on it)?

Please suggest me what would be the best (or usual) way to generate the data script for this kind of system using VMD (as I have been learning this). I have started using this for few months. I would really really appreciate if you could go easy on me. Any sort of help, suggestions/suggested readings/tools, opinions, are highly appreciated.

Thank you very much for your valuable time.

I feel a little big awkward inserting my own work into this
discussion. I'm sure there are ways of doing what you are trying to
do using VMD and topotools and it sounds like you are pretty familiar
with those tools. I hope Axel will reply.

However if you don't strictly need to use a graphical interface,
(and since nobody has replied yet), then the simulation you described
could be built using moltemplate:

This is a large program which is being actively developed. It has
not been formally announced yet, but I will announce it here soon.
Moltemplate does not have as many features as VMD, but it gives you a
lot of flexibility for specifying angular interactions and
force-fields. It also has some geometrical customization options,
including the ability to make polymers, tubes, solids, sheets, and the
ability to delete molecules in a given area, or delete individual
atoms or bonds.

- The procedure for making a thin layer of atoms, cutting a hole in
it, solvating it, and holding it rigid is discussed in the
"translocation" example bundled with moltemplate. (This is also shown
on the web page.)

- There is a "waterSPCE" example bundled with the moltemplate
download. This demonstrates how to create a box of SPC/E water (as an
alternative to the simple Lennard Jones fluid in the "translocation"
example.)

- Tubes are easy to create in moltemplate. (See the logo on the main
web page.) Building a carbon nanotube should not be difficult. (If
you can make a graphene sheet, or any other sheet using simple tiling
commands, then it's easy to turn this sheet into a tube. I haven't
yet added spheres. Working on that.)

In addition to these examples, there is an incomplete manual, but it
needs to be reorganized and edited. Moltemplate has some quirks of
its own. I can't gaurantee it is easier than using topotools, but I
am actively working to make it better.

Generally the more difficult part is selecting the force-field you
want to use. But for your system it should not be difficult. The
force-field for SPC/E water is included with moltemplate. You will
have to manually define the pairwise interactions between the carbon
atoms and the "O" and "H" atoms in the water. I assume you will want
to freeze the positions of the carbon atoms.

I do have relatively limited time to respond to queries this month, so
I don't have time to build this system for you.
But I will reply to emails if you get stuck using moltemplate. (If
you get the graphene sheet working, I can help you with the nanotube,
for example.)

I hope this helps.
Cheers!

I am using LAMMPS for MD simulation of carbon nanotube (CNT). I am new to
this field and a beginner of LAMMPS as well. I have been trying to simulate
water transport through CNT with the similar setup as in Ref. 1 & 2.

I built this system for you as an example tutorial for "moltemplate",
including force-fields, input scripts, images and a video. (See
attached images.)
http://www.moltemplate.org

Currently there are several pictures which help show how to build the
system at the main web page. (Scroll down to the third or fourth
example. If in the future, it's not there, it will be included in the
examples download at the upper-left.)

You can use this geometry for simulations at constant volume or
pressure. (Scripts included for both.)

P.S.
Feel free to send corrections. I used SPCE water instead of TIP3P
water in this example. If you want to send me a working tip3p example
in LAMMPS and I'll update the example.)

If you use this example in your published work, please mention that
you used "moltemplate" to build it.
Thanks! 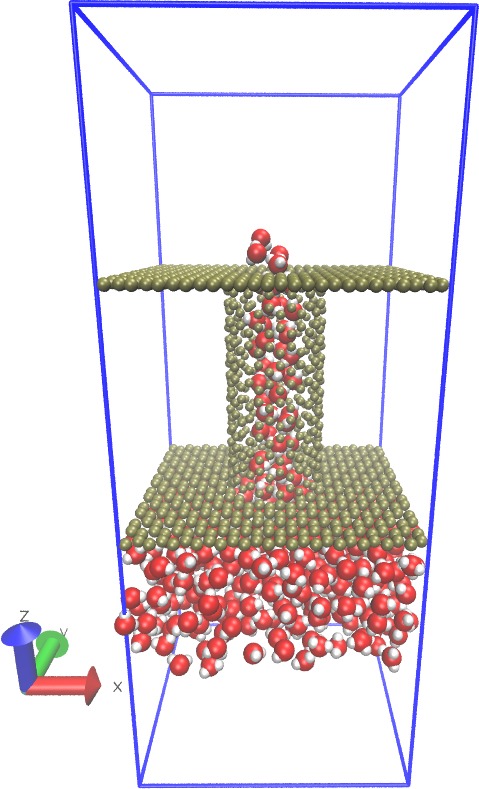