I used the fix deform command in LAMMPS with remap x. The documentary say that lammps forces atoms to have an affine deformation like the global one. My example is a nanocomposite with a rigid nanoparticle. When I used deform all ( atoms) or deform ( group of atoms) I see that the Nanoparticle will not deform. This mean that we don’t have an affine deformation within the NP.

Can you explain better the procedure of fix deform for heterogenous system?

I don’t think that has anything to do with fix deform but is a consequence of fix rigid maintaining the geometry of rigid objects.
Those will be initialized at the beginning and then only translations and rotations to the body center of mass and orientation applied and from that the coordinates updated.
so if any other process changes the positions of atoms, they will be overwritten the next time to positions are updated by time integration. same is true for velocities. so only forces can impact the location and orientation of rigid objects unless the rigid fix is explicitly reinitialized.

Note that I didn’t use the fix rigid command. I have used deform all command and I have seen that the nanoparticle will not deform.

This mean that we don’t have an affine deformation

Note that I didn’t use the fix rigid command. I have used deform all command and I have seen that the nanoparticle will not deform.

if you do not use fix rigid, then you should not talk about a “rigid” object. possibly you mean “immobile”.

This mean that we don’t have an affine deformation

it is impossible to discuss this topic in this kind of generality. the LAMMPS commands behave as documented.
if you believe they do not, you have to provide a (small, simple, minimal) example input deck demonstrating it, so that we can determine whether you are using the command incorrectly or interpreting the results incorrectly or there is a bug in LAMMPS. since this is a commonly used feature that is available in LAMMPS for a long time, the chances are high that a bug would have been discovered already.

I don’t use fix rigid command, but I see that the nanoparticle will not deform.

I don’t use fix rigid command, but I see that the nanoparticle will not deform.

probably because you made a mistake.

you are forgetting that you are also running an MD simulation at the same time you deform your system, so the atoms will change their positions also due to the forces they experience.

fix deform will do a homogeneous scaling of all coordinates (if dilate is set to group all, which is the default). that is implemented by converting the atom positions to fractional coordinates, then changing the box dimensions and then restoring the positions back to cartesian based on the new cell dimensions. but if you have different strength forces between atoms (e.g. within your “softer” polymer and your “harder” nanoparticle) then the nanoparticle will easily “snap back” because its interaction forces are stronger. with a homogeneous material this is not possible, because all interactions have the same strength.

what you observe is the physical behavior and quite expected, what you apparently expect is not as far as I can tell from the information you have provided.
it is definitely not a problem of LAMMPS. it does exactly what you are telling it to do. 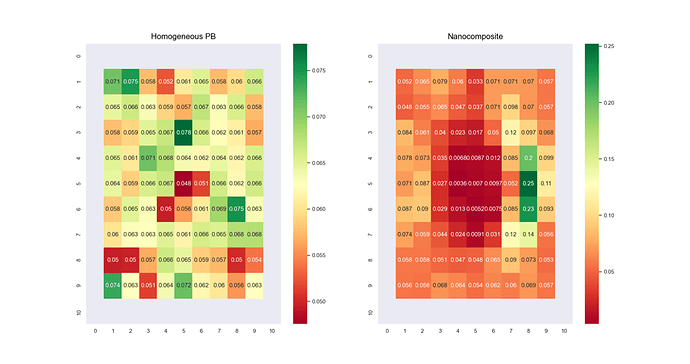 Dear Sir
I need to know in detailed about the fix deform command in LAMMPS. In the documentary LAMMPS say: setting remap to x forces the atoms to deform via an affine transformation that exactly matches the box deformation. This setting is typically appropriate for solids. I have used deform command for pure homogenous system and also for heterogeneous one, then I have calculated the distribution of local strain in both system; for the homogenous system, we can see clearly the affine deformation (see attached figure) while for the heterogeneous one (Nanoparticle inside polymer) we can see that the deformation is not affine.
Can you explain me how LAMMPS adjust the local deformation in heterogeneous system?
Thank you
[cid:[email protected]]
Note that I have used this deform command:
fix integrator all npt temp 150 150 \(100\*dt\) y 1\.0 1\.0 (1000*dt) z 1.0 1.0 $(1000*dt) drag 1.0