Is it possible to hold the value of a random number as constant for a fixed time interval instead of changing after each timestep in lammps(10Mar2021)?

Try using fix ave/time on an equal style variable. If you set nrepeat to 1 the fix becomes effectively a cache for instantaneous data.

Not working, I am using the following lines,

The variable friction is changing at each time step.

and then printing the instantaneous values of friction_held.

As per the documentation, fix ave/time creates a new output value (in this case scalar) which you must access separately through a new equal-style variable. LAMMPS fixes in general do not modify variables passed to them, “reference” style, unless they are internal-style variables.

The above gave me an error.
ERROR: Variable friction_held: Fix in variable not computed at a compatible time (src/src/variable.cpp:1661)

well, you cannot access the data from fix ave/time until it has at least acquired one sample (which will be at step 1000). you are trying to read it at step 100.
try adding short “dummy” MD run (possibly without time integration so particles won’t move) to “prime” the fix.

Thanks Axel. I will try that.

I tried your suggestion. I am still getting the same error. I have attached my code. 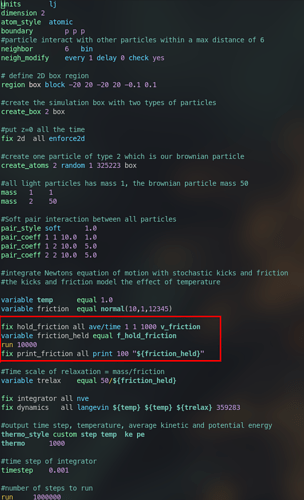 hmm… the data is accessible in between runs.
this works for me:

output of the print commands is 3x one value and 2x another value.

I can confirm that (1) print “${friction_hold}” works, (2) just about any other output mechanism doesn’t (e.g. fix print, thermo_modify custom, etc) – maybe the test in src/variable.cpp:1681 is too restrictive for this case?

What can be done is to use a fix vector to accumulate values of the random variable and then use an equal-style variable to “point” to the same index for N steps, giving the desired result. This will eat a bit of memory for allocating the fix vector, but it should be alright for reasonable-sized runs. MWE attached below – note that fix vector has to fire off every step on which output is requested, not every N steps, or else it runs into the same issue as the fix ave/time method.

Diljith – you also have an error in the following line:

which should be v_friction_held in the denominator instead. What you have written will give a trelax value that is constant for the entire run, instead of changing every N steps like you want. See the documentation on LAMMPS script parsing rules for the meaning of ${}.

MWE for fix vector method (also look at the difference between v0 and v1):

Which means that the whole exercise with fix ave/time was not needed. With a loop the variable can return a different random number every time.

For that matter, the documentation does not say that fix langevin will accept an equal-style variable defined with “v_” for the damp input – and looking at the source code, it definitely won’t. What LAMMPS will do with your script is run a long run using whatever value the variable had at the start of the run as a constant damping factor. (As per documentation this is the expected behaviour using “${}”.) To do what you are trying to do, you will have to use some sort of loop.

Thank you for your valuable feedback.