I am trying to ramp temperature in multiple runs using the run start/stop command, like mentioned here and here.
I currently use the 5Feb18 version of LAMMPS. To give you a rough idea of what I am doing:

There is definitely a difference between using two separate runs, and using the run start/stop command.
However, what I am unable to see is a uniform ramping over the entire 40000 time steps.

I have attached T vs time plots relevant to this discussion:

Is this the expected behavior? If yes, what must I do to make multiple runs which still resemble a single run?

Thanks a lot for your time. 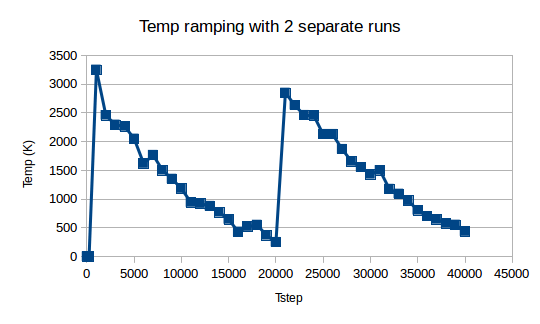 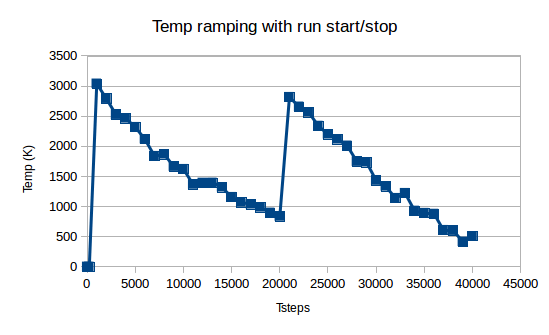 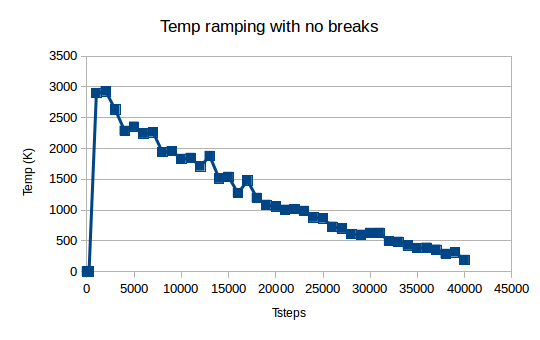 First try doing it w/out the loop. Just use several successive run commands

see what the temp does.

of run commands in a loop.

I have kept forgetting to reply to LAMMPS Users Mailing list… I think the problem should be solved by using a start time of 0 instead of $(step). I am posting my previous reply again:

Just had a quick look at the document for run:

For example, consider this fix followed by 10 run commands:

This explains why you did not get something you expected, as you have changed your start time.

yes, this is correct, same start and stop in each run.

Not start T1 and stop T2 as I wrote earlier. Good catch.