Is there any known reason for such behavior? This only happens when i add rigid MoS2 sheet in simulation (i.e water-surfactant system runs perfectly fine in same conditions).

Your fix npt command must be allowiing that to happen,

And it would be driven by the Pxx, Pyy, Pzz components

of the pressure tensor. So if you monitor those in thermo

output I imagine you will see they are consistently negative

or positive, which will shrink/grow the corresponding dimensions.

Thank you for reply. I ran simulations again with thermo_custom set to give out pxx, pyy, pzz. Indeed as you suggested pzz is nearly half of pxx and pyy. Also values for all of them is really high [Graph1]. If i couple them with following line:

There is no stretching in Z direction but Pxx, Pyy Pzz fluctuate a lot [Graph 2]. I understand that it is due to damping factor being 100 so testing now with increasing values of damping coefficient.

I have 3 more questions however: 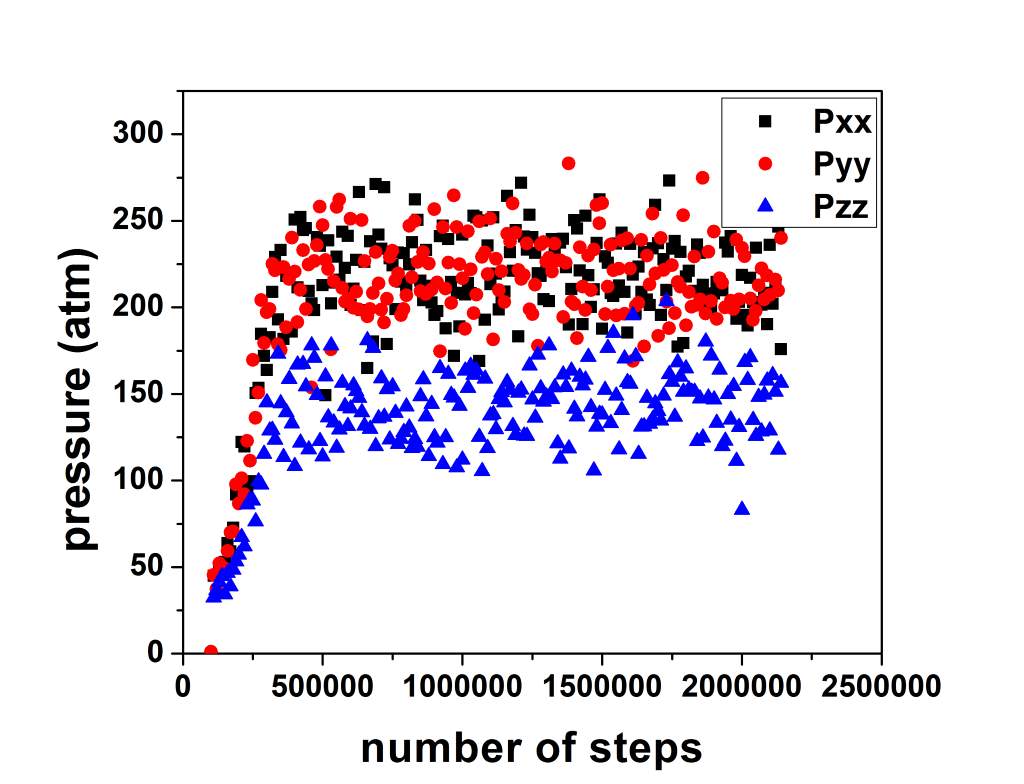 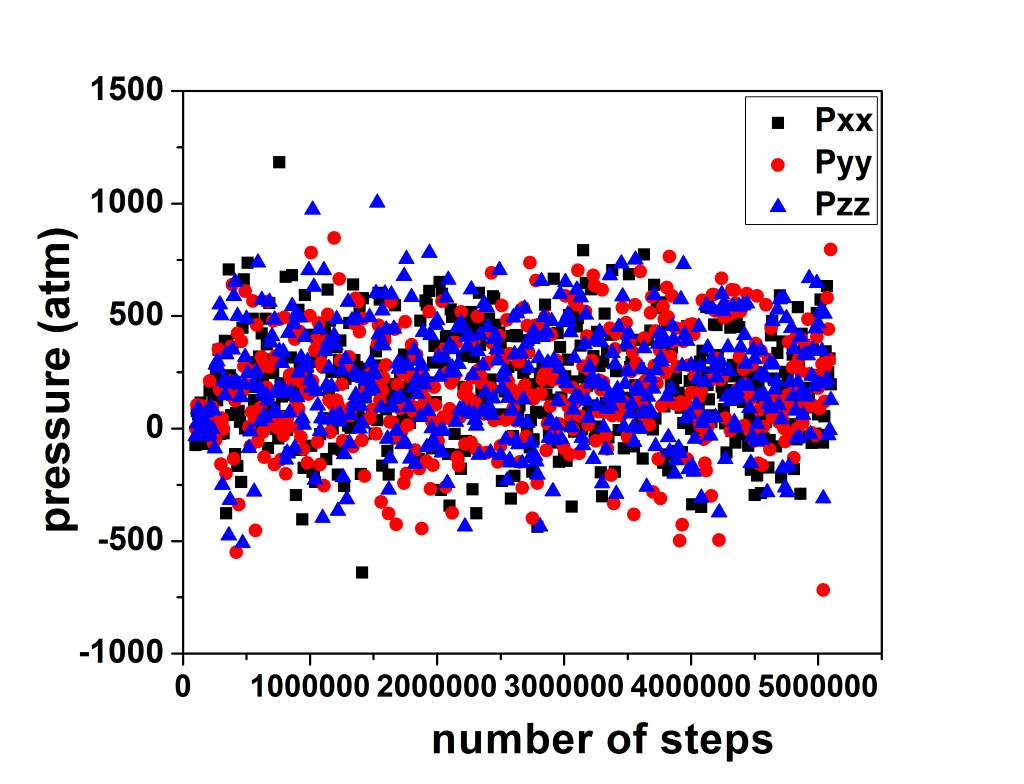 Incidentally, I tried running the system that Amit posted on 1/26, and
there were definitely some problems with the physics. The system
exploded. (I was also able to get LAMMPS to segfault.) I'll post
these details and input-files in the other thread which discusses the
segfault. I suspect this is related to the problems you are
discussing in this thread.

There is no substitute for looking at your system visually.
Amit, do you know how to do this? If you look at how the atoms move,
you will be able to see something is very wrong. One way is to use
VMD. If you have VMD installed, then when you run moltemplate this
way:

... it creates a file ("system.psf"). Later, after your simulation
has finished, you can run VMD this way:

In the white box in the "VMD Main" window, right-click on the
"system.psf", and select "Load Data Into Molecule". Then click on the
"Browse" button, select the dump file you created earlier, and select
"LAMMPS Trajectory" from the "Determine File Type" pull-down menu.
Then click "Load".

I did not intend to reply to your post but I got your name confused
with a different moltemplate user named Ankit.
I'm embarrassed about this. Forgive me.

It seemed like Ankit had not looked at his simulation visually yet, so
I suggested that's what he do. That advice certainly applies to you,
if for some reason, you have not yet looked at your simulation
trajectory either. It sounds like you are using moltemplate, so the
advice I gave (using the "-vmd" option) should work. However if
you're not using moltemplate to build your system, I attached some
more general instructions to this message. (Just remember to change
the name of the data file from "system.data" to the name you gave your
data file.)

Other random advice:
It is often helpful to simplify the system, one step at a time until
the problem goes away.

For example: it is tricky to run NPT simulations when a large sheet is present.
(It sounds like you are using fix npt with the "aniso" keyword. That's good.)

Does the system explode if you remove the sheet from your simulations?

Alternatley, have you tried removing the surfactants?
(As you probably know, if you are using moltemplate, you can do this
by commenting out the line(s) where you instantiate these molecules.)

Sorry for the delayed reply. Yes I do visualize the system, but with simple lammpstrj file, i.e. dumping data periodically to lammpstrj file and loading it in vmd followed by unwrapping (pbc unwrap). So far (as stated in my previous mail), i only managed to get a stable system after giving “iso” keyword in npt fix. But pxx, pyy, pzz fluctuate a lot. Also as i stated it need not necessarily explode (although it certainly did initially, i was taking it as a feature of large vacuum chunks present in my initial simulation box which accelerate molecules to high speeds under npt, resulting in atoms lost error), as in my case it gradually shrinks in x and y direction. Energy is stable, dimensions grow slowly. That is why i wanted to know in previous mail:
“”"

Till now i have played with drag, pchain keywords but no avail, i.e. giving iso prevented any crash but pressure fluctuates a lot.

Apologies! Clicked send little early! When I do remove the sheet (i.e only water and surfactant in simulation box) it does not explode or crash. However pressure tensor components still fluctuate, though spread is very less (I did attach graph of it previously). I will try just water and sheet, but it will take a litle while as all ques are full right now at local cluster.