Temperature in NVT and NVE ensembles

First, I hope my message is clear enough.

I am trying to do NVE simulation for two-dimensional Lennard Jones fluids composed of 121 atoms. I want the NVE ensemble to have a constant total energy corresponding to the total energy that the same system can have at temperature 0.48 .

Could you please help me understand the mistake I made ?. In the end, I want to plot the radial distribution function for the NVE simulation whose temperature fluctuate around 0.48 at equilibrium.

Below is the script I am using. I would like to say that there are fixed quantities that I have to follow according to some reference and they are : the timestep value, the temperature, the number of particles, the cutoff distance (6.5) and the number of timesteps in the NVE run command (6000). 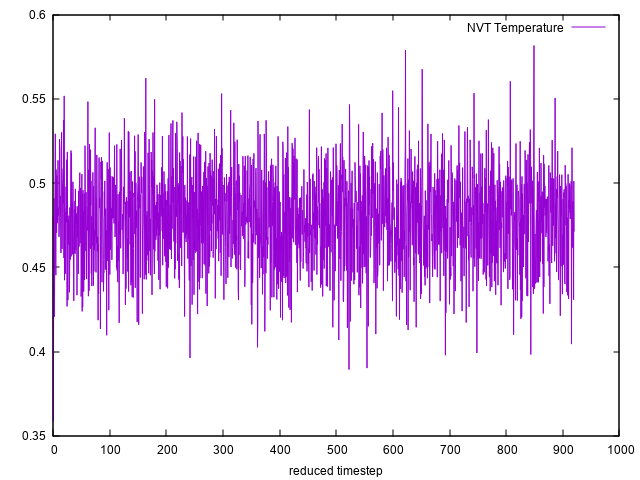 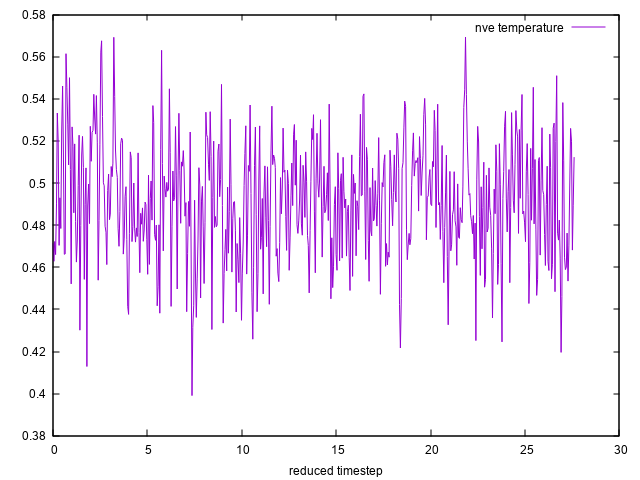 The problem is, that you still have fluctuations of the total energy and those fluctuations are larger when the system is smaller.
so you can try two things.

please also keep in mind, that your g®s are somewhat affected by the finite (system) size. so a larger system with more particles will yield a more representative g®.

BTW: i would also recommend to change the averaging settings for your g® computation. right now, you are collecting just one single snapshot. it would be more accurate to collect data multiple times, say every 100 steps and start about halfway through your run. that would change the fix ave/time command to:
2 all ave/time 100 30 3000 c_1[*] file tmp10.rdf mode vector start 3001