Let suppose that I have a workflow like the one depicted in the image below. For the sake of simplicity the nodes represent some simple computations, but they can be complex calculations.

Every single node of the graph is computed in a queue system (Slurm in this case). Also, the computations are performed in offline mode. Everything works well if the node has only one parent, but when the node has multiple parents things does not work as expected. For example, In the graph shows below there is a node called binder, this binder function has several explicit dependencies in its parents nodes. So, the fireworks workflow has a set of connections like

The problem that I’m having is that I pass arguments from parents to children using update_spec, but apparently binder is only called with only the dependencies of one parent, the last parent to be execute. So, when binder is executed it is complaining that can find the other dependencies.

How Can I pass all the parents dependencies the children processes? 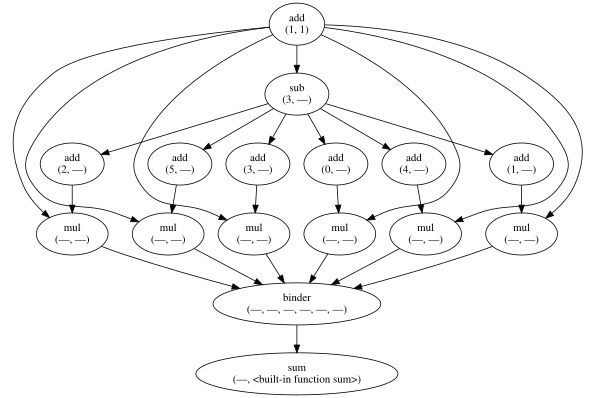 I think that what you are describing is that all parents are calling “update_spec” on the same key. e.g., you have 6 parents that all return something like this:

In this case, the “param1” variable for the child will indeed be overwritten to the my_dependency value for the last parent. This is because the update_spec performs a dict update command (which overwrites the previous value of “param1”).

I think that what you probably want is to use the mod_spec variable:

Then, each parent will push its dependency value onto an array, i.e., param1 in the child will be an array containing all dependency values. You can look at the class DictMods in the FWS source to see all the possible commands like _push (e.g. _set, _unset, _inc, etc).

If you are looking for a simple runnable example, you might try this tutorial ("A workflow that passes data):

There are other ways to do it, e.g., by using different keys (not “param1”) for the different parents.

Hi Anubhav,
I’m probably doing something wrong, but in my program I am using a unique identifiers to label the parameters that are passed to the children, something like

these unique identifiers are used to label the arguments that are passed from parents to children but it does not work because there are some missing dependencies. It seems like the last computed parent process is the only one that is communicating its dependencies to the children, while the other parents do not pass any message at all. I am surprised because I think that fireworks makes a kind of merge-dependencies before submitting the children processes.

But anyway, passing the arguments using mod_spec is the way to go.

Thank you for the prompt answer.

If you used different variable names for update_spec, they should not have overwritten one another.

Do you know if the code works OK when it is not in offline mode?

I have just written the following small test script and it runs without problems:

But I did not try offline mode.

Hi Anubhav,
I have been using different variables names for update_spec and it works in normal mode (i.e. not offline mode) but it does not work in offline mode. In the offline the the children don’t receive all the dependencies from their parents.

Ok, thanks very much for reporting this. I will take a look into this issue, and specifically test the offline mode, on Friday.

I added a unit test to FWS to test the job passing info and found no issues, e.g. see this method in the latest commit of FWS:

I have two parent jobs feeding into the same child job, and both parents are able to update the job info of the child without issues.

The only other thing I can think of is if somehow you are running all parent jobs in the same directory. Then, the output files needed to recover the jobs will be overwritten.

At this stage, however, I am filing this under “cannot reproduce”. If you can present a runnable example of the error, I will add that as a unit test and try to fix the issue.